Update on the Pont Bees (December

During the winter conditions of December our bee friends are only able to survive on their honey supply, this means that if the bees hadn’t done such a good job of collecting nectar to make the honey in the last few months, they would be in some serious trouble now.

Why is there a nectar shortage in December? 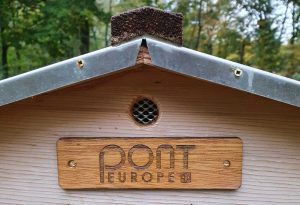 can smell the nectar from a long distance away, the problem with December is that the plants, trees and nature in general will go into changes. The largest of the changes being the plants dying, with most of the common flowers dying that house the nectar and pollen, the bees will only have access to the Helleborus flower during winter and they are not super common.

Bees make their own warmth

Similarly to how we as humans will find a warm jumper or get under some covers in order to heat up our body temperatures during the cold days/nights of winter, the bees also have a strategy to surviving the cold. Since most bees work together in colonies they are already used to being close to one another, during the winter thousands of bees from a hive will bunch up together to create warmth. Their bodies will create heat in a concentrated area of the hive and the heat will struggle to escape due to the tight grouping of the bees, this is vital for bees to survive. 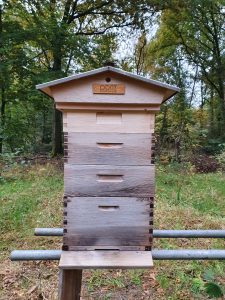 the objective of attacking, the bees will dive on top of the wasp and surround it as much as possible with piles of bees, this is because the temperature inside of the bee pile is so high for the wasp that it will kill it rather quickly.

The Queen takes a break, or does she?

Due to the increased cold temperatures of winter the queen bee will sometimes stop laying eggs, however this process of life is only stopped when the temperature goes beyond cold. The other process can happen in mild winters which is the queen bee will lay more eggs than usual and continue laying eggs through winter to have a strengthened work force, they will be ready for when the bees get back to work in spring.

Its not all happy news however as some colonies of bees may have been under quota for their honey supply, since it is their lifeline to surviving the winter we risk entire hives dying of starvation.  If the bees were to try and find more honey during winter then they risk the increased temperatures killing them on the hunt for nectar, their death will lead to the entire colonies death.

In these instances a professional bee keeper will feel the weight of the hive and be able to make a judgment on the amount of honey within the combs, if there isn’t enough then the bee keeper will help feed the bees.

As with everything in life, the bees are tested during the winter to see how prepared the colony is and has been in terms of making honey, laying eggs, collecting food ect. If everything goes well then the hive has no reason to seek out flowers and can instead hibernate in the hive soundly throughout winter.

Our bee keepers won’t disturb the bees during their hibernation cycle and will keep the hive closed as much as possible until they are ready to continue their journey into Spring. However the bee keepers will make sure they have enough food throughout winter and that the bees are placed into the best environment for survival.

Manage Cookie Consent
To provide the best experiences, we use technologies like cookies to store and/or access device information. Consenting to these technologies will allow us to process data such as browsing behaviour or unique IDs on this site. Not consenting or withdrawing consent, may adversely affect certain features and functions.
Manage options Manage services Manage vendors Read more about these purposes
View preferences
{title} {title} {title}